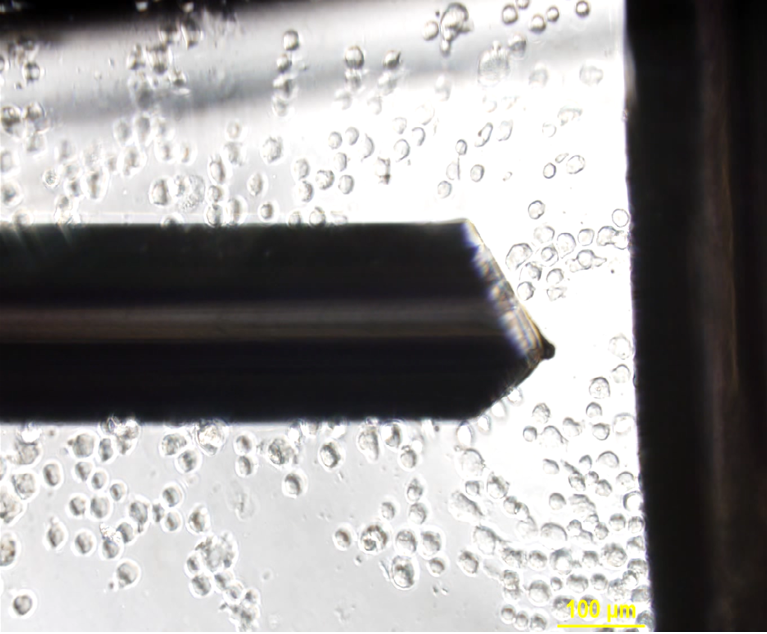 Non-uniform electric field induces motion in polarizable particles, which is the termed as DEP. DEP is a label free and high throughput technique and is known to determine subtle morphological changes within biological entities. Motion of the dielectric particles towards high intensity field and low intensity fields are termed as n-dep and p-dep respectively. The frequency at which the net force acting is zero is termed as Dielectrophoretic crossover frequency.

Experimental setup includes the fabrication of ‘microwell devices’ as shown in Figure B below. These devices contain thin platinum wires arranged in a ‘T’ shape as shown in Figure C below. Cells are transferred via pipette into the device, and an electrical current is ran through the wires, inducing dielectrophoresis.

In order to obtain the properties of the cells (total membrane capacitance and permittivity), we modeled the stem cells as a single-shell model.

The main equations are as follows:

Funding Source:  This project was funded by the John F. Keegan Fellowship (to SKT). The travel to present this poster at Oregon State University Bioengineering Symposium 2019, Corvallis is supported by Office of Undergraduate Research Travel Grant, University of Idaho.